The latest long-lived NVIDIA Linux driver reached the 390.25 release a few days ago. Now you can install it in Ubuntu via PPA repository.

NVIDIA 390.25 adds support for GeForce GTX 1060 5GB and Quadro P620 GPUs. And there are following changes included in the release:

It’s NOT recommended to install these proprietary divers unless you know how to restore changes if anything goes wrong.

1. Open terminal via Ctrl+Alt+T or by searching ‘terminal’ from application launcher. When it opens, run command to add the PPA:

Input your password when it prompts (no visual feedback while typing) and hit Enter. 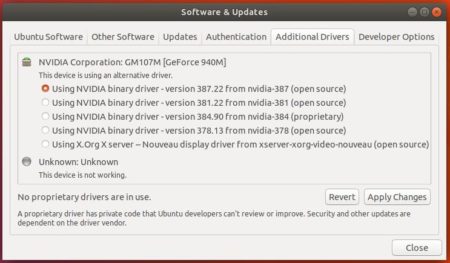 For some devices, there may be a black screen issue after installing NVIDIA proprietary GPU drivers. Try setting NOMODESET in grub option, or removing the proprietary driver via command: