The open-source code editor Brackets 1.11 has been made as snap package, so you can easily install it in Ubuntu 16.04 and higher either via Ubuntu Software or a single command.

Ubuntu includes the daemon and tooling to interact with snap packages since Ubuntu 16.04, you can simply open Ubuntu Software and search for packages available in Snappy store.

Search for and install ‘brackets’ via Ubuntu Software: 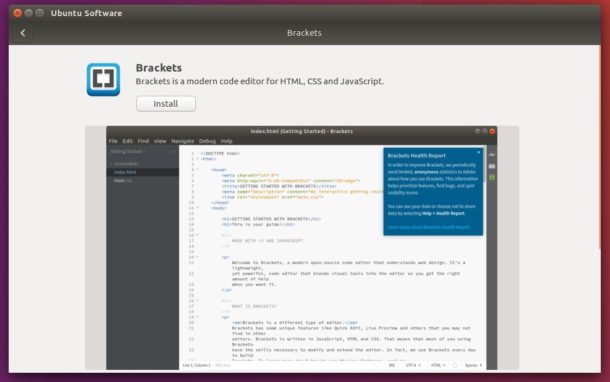 For those who don’t want to login Ubuntu One, open terminal via Ctrl+Alt+T or from app launcher. And run command to install the snap:

Input your password (no visual feedback while typing) and hit Enter.

Note that the snap packages bundle with most required libraries and run-time, so they are big in file sizes.

The snap package co-exists with the traditional .deb installation. And it updates itself once a new release is published in snappy store.

To remove the snap, either use Ubuntu Software or run command: