How to Install Mastodon Client ‘Tootle’ in Ubuntu 18.04

Mastodon is a free, open-source social network server based on ActivityPub. Anyone can run a server of Mastodon. Each server hosts individual user accounts, the content they produce, and the content they are subscribed. Every user can follow each other and share their posts regardless of their server.

Tootle is a simple GTK3 Mastodon client which was originally designed for elementary OS. 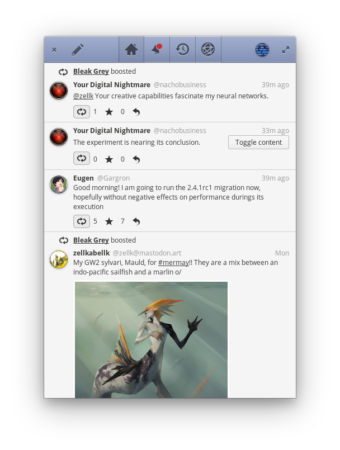 Tootle has made into Ubuntu universe repositories for Ubuntu 19.04 and Ubuntu 19.10.

For the current two LTS Ubuntu 18.04 and Ubuntu 16.04, it can be easily installed via Tootle Snap package.

For Ubuntu 18.04, simply search for and install ‘tootle’ Snap package from Ubuntu Software:

For Ubuntu 16.04, open terminal via Ctrl+Alt+T and first install snapd by running command:

Then install the software via command:

Once installed, launch the software from system application menu and enjoy!

To remove the Mastodon client, either use Ubuntu Software or run command in terminal: