A new update for the latest long-lived NVIDIA Linux driver 384 series was released a few days with some new GPUs support and a few fixes.

The official Linux binaries are available for download at the link below:

To add the PPA, open terminal via Ctrl+Alt+T and run command:

The new driver release is not published in the PPA at the moment, because the launchpad build farm is disabled pending maintenance. Once it’s available, launch Additional Drivers utility and you’ll see NVIDIA 384 drivers in the list: 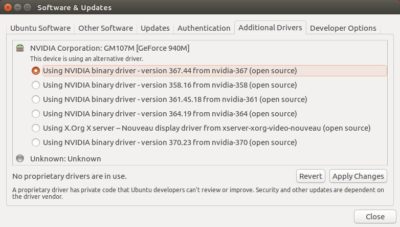 You may need to boot into recovery mode -> root prompt, or press Ctrl+Alt+F1 on login screen to get into command console.
In addition, to remove the PPA repository launch Software & Updates utility and navigate to ‘Other Software’ tab.