How to Install LibreOffice 5.4.1 via PPA in Ubuntu

September 1, 2017 Comments Off on How to Install LibreOffice 5.4.1 via PPA in Ubuntu

The first maintenance release for LibreOffice 5.4 series was released last night with a huge list of bug fixes.

LibreOffice 5.4.1 includes approximately 100 bug and regression fixes, along with document compatibility improvements. Technical details about the release can be found in the change logs here: https://wiki.documentfoundation.org/Releases/5.4.1/RC1 (fixed in RC1) and https://wiki.documentfoundation.org/Releases/5.4.1/RC2 (fixed in RC2).

How to Install LibreOffice 5.4.1 in Ubuntu:

Open terminal via Ctrl+Alt+T or by searching for ‘terminal’ from application launcher. When it opens, run following commands one by one to install the latest LibreOffice office suite from its official PPA.

Input your password (no visual feedback while typing) when it prompts and hit Enter.

2. Then launch Software Updater and upgrade LibreOffice after checking for updates: 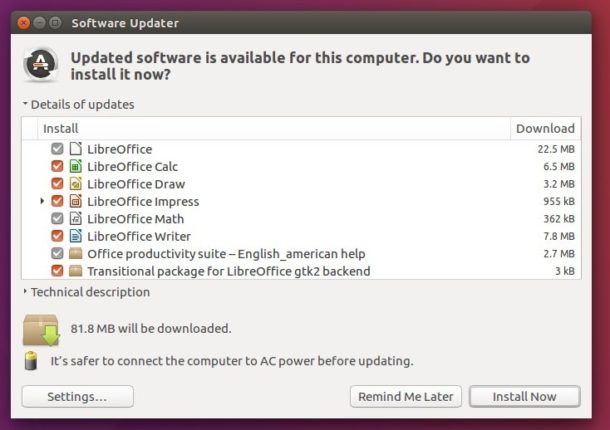 You can restore to the old stock version of LibreOffice in your Ubuntu by purging the PPA via command: