mpv was forked in 2012 from mplayer2, which was forked in 2010 from MPlayer. The motive for the fork was to encourage developer activity by removing unmaintainable code and dropping support for very old systems. As a result, the project had a large influx of contributions.

mpv carries a large amount of changes since it was forked from MPlayer. The most user visible change is the new on-screen-controller (OSC) which is a minimal GUI integrated with mpv to offer basic mouse-controllability. It is intended to make interaction easier for new users and to enable precise and direct seeking.

and various other changes, see release note for details.

How to install mpv in Ubuntu / Linux Mint:

1. Open terminal from app launcher or via Ctrl+Alt+T keys, when it opens, run command to add the PPA:

Type in password (no visual feedback) when it prompts and take a look at the ppa description in the terminal output.

2. If you have a previous release installed on your system, launch Software Updater to upgrade mpv to the new 0.24 release: 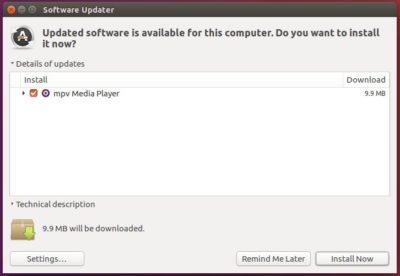 Or you can run the following commands to install / upgrade the media player:

And you can remove the PPA repository by launching Software & Updates utility and navigating to Other Software tab.