The official .RUN installers for x86, x86_64, ARM, and other architectures are available for download at the link below:

The “Graphics Driver” Team is maintaining a PPA with proprietary GPU drivers (378.13 is ready at the moment, CHECK HERE).

1. Add the PPA via following command in terminal (Ctrl+Alt+T): 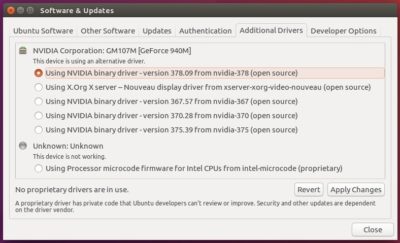 For some video cards, there may be a black screen issue after installing NVIDIA proprietary GPU drivers. Try either setting NOMODESET in grub option, or removing the proprietary driver via command: