NVIDIA Linux driver 367.57 has been released as the latest long lived branch version.

NVIDIA 367.57 adds support for NVIDIA 3D Vision 2 Stereo on Linux. This IR emitter can be used with stereo mode “10” set in the X configuration file.

Besides that, only following bugs has been fixed in this release:

Besides using the official Linux binary, NVIDIA 367.57 has been made into the Graphcs Driver Team PPA for Ubuntu 16.10. Ubuntu 16.04, Ubuntu 14.04 support should be available soon.

Type in your password (no visual feedback) when prompts and hit Enter.

2. Then launch Additional Drivers utility and choose the new driver once the 367.57 is available: 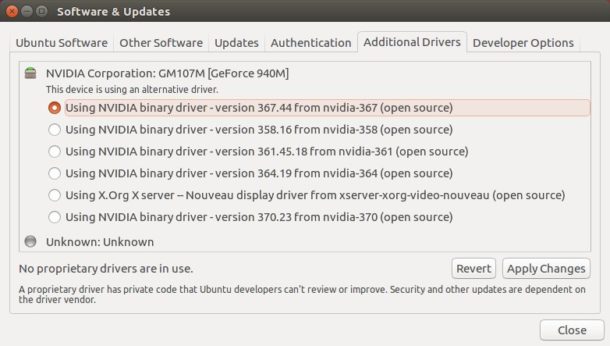 And click Apply Changes will download and install the driver from the PPA. Restart your computer when done.

For some cards, there may be a black screen issue after installing NVIDIA proprietary GPU drivers. Try either set NOMODESET in grub option, or remove the proprietary driver via command:

You may boot into recovery mode -> root prompt, or press Ctrl+Alt+F1 on login screen to get into command console.