OpenMV, an unofficial open source engine reimplementation of the game Morrowind, has reached the 0.40 release a few days ago.

OpenMW is a recreation of the engine for the popular role-playing game Morrowind by Bethesda Softworks. You need to own and install the original game for OpenMW to work.

The OpenMW team is proud to announce the release of version 0.40.0! Grab it from our Downloads Page for all operating systems. This release brings some small new features, but mainly bug fixes and improvements. We’re winding down on implementable features, these are exciting times for OpenMW, even if releases have a little less user-visible changes. The game is basically fully playable, and future releases will bring mostly more fixes and optimizations.

Check out the release videos:

How to install OpenMV 0.40 in Ubuntu:

The official PPA has built the packages for current Ubuntu 16.04, Ubuntu 14.04 LTS release, and the next Ubuntu 16.10 Yakkety. To install or upgrade it, do:

Type in your password when it asks and hit Enter.

2. To upgrade from a previous release, launch Software Updater and install available updates: 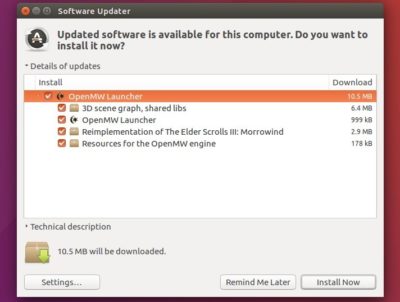 Or just run commands below one by one to update and install the latest OpenMW packages: