The Wine development release has reached version 1.7.50. Its official PPA has been updated for Ubuntu 14.04 LTS and derivative.

Wine (originally an acronym for “Wine Is Not an Emulator”) is a compatibility layer capable of running Windows applications on several POSIX-compliant operating systems, such as Linux, Mac OSX, & BSD. Instead of simulating internal Windows logic like a virtual machine or emulator, Wine translates Windows API calls into POSIX calls on-the-fly, eliminating the performance and memory penalties of other methods and allowing you to cleanly integrate Windows applications into your desktop.

Open terminal from the Dash, App Launcher, or via Ctrl+Alt+T shortcut key. When it opens, run below command in terminal:

You can do this via Synaptic Package Manager (available in Software Center): 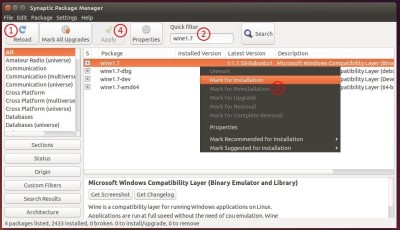 or by running below commands one by one: